American Libraries Magazine
https://americanlibrariesmagazine.org/2020/06/01/disasters-in-libraries/
“Having an emergency response plan is essential. These books can help libraries of all kinds ensure that they’re prepared for any kind of calamitous event or natural disaster. 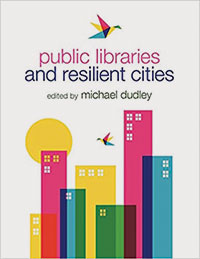 Public Libraries and Resilient Cities
Edited by Michael Dudley
Resilience is the art of being able to bounce back from disaster. The uniting thesis of these essays is that public libraries are crucial to this process. Dudley makes the point that climate change guarantees near-future crises; other essays use relatively recent disasters, such as Hurricane Katrina, as examples. However, the bulk of the book consists of case studies of libraries engaged in resiliency activities, including lunch programs and job-seeker support. These may provide inspiration to institutions that want to become more active in urban resilience, but there are no explicit how-tos here. Instead, the studies focus on why libraries ramped up community activity, what this entailed, and outcomes. This book is a good first step for libraries seeking new directions for programming and services. ALA Editions, 2013. 192 p. $67. PBK. 978-0-8389-1136-5. (Also available as an ebook.) 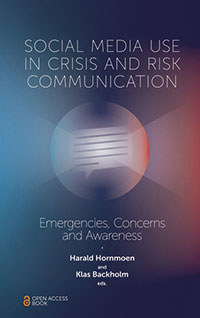 Social Media Use in Crisis and Risk Communication: Emergencies, Concerns, and Awareness
Edited by Harald Hornmoen and Klas Backholm
A strong understanding of social media should be a part of librarians’ disaster response toolkits, and this book is an excellent place to start. Hornmoen and Backholm’s book consists mainly of academic studies of social media activity during the 2011 terrorist attack on Utøya, an island of Norway. Though highly specific, it represents a good case study of social media usage in a pressurized situation. As information professionals, librarians should consider how social media can benefit patrons during a disaster. It is not hard to envision librarians serving as curators of a Twitter-based, crisis-media response. The book includes an abundance of metrics and data that will satisfy academic-minded readers. Emerald Publishing, 2018. 328 p. $33.99. PBK. 978-1-7875-6272-1. (Also available as an ebook.) 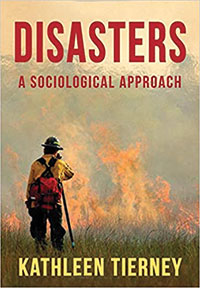 Disasters: A Sociological Approach
By Kathleen Tierney
This book frames disasters in a holistic way, considering both immediate effects and the secondary, indirect harm to society that expresses itself differently depending on demographics, socioeconomic status, and local governance. Public librarians will find it useful to understand the underpinnings of the challenges that patrons face during and immediately after crises, as this awareness could help guide programming and services. Social vulnerability, often a result of marginalization based on class, race, age, citizenship, and disability status, is a major topic of discussion and provides insight into the struggles of groups that already depend on library services even during the best of times. Public libraries in particular could take this lesson to heart. Polity, 2019. 224 p. $26.95. PBK. 978-0-7456-7102-4. (Also available as an ebook.) 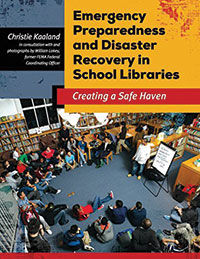 Emergency Preparedness and Disaster Recovery in School Libraries: Creating a Safe Haven
By Christie Kaaland
Experiencing a disaster in a school is a nightmare scenario, but librarians can do much to prepare for, mitigate, and recover from such an event. This book is thorough in its discussion of types of disasters and possibilities for addressing them. Principal among these is the danger of school shooters. While volcanoes, dust storms, and pre–COVID-19 pandemics all get their due, the events at Columbine and Sandy Hook receive most of this volume’s attention. Calls to action scattered throughout the text culminate in detailed appendices and a bibliography aimed at supporting bibliotherapy for traumatized young children. This short manual is packed with excellent information, and any school should consider it a must-buy. Libraries Unlimited, 2014. 203 p. $55. PBK. 978-1-61069-729-3. (Also available as an ebook.) 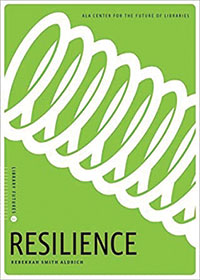 Resilience
By Rebekkah Smith Aldrich
In a clear and enjoyable voice, this book defines resilience, explains why it’s important, and outlines the role of libraries in attaining this quality. This book focuses on cooperation, and presents the role of libraries as facilitators in the development of strong, equitable communities. Climate change features strongly as a risk worth preparing for, but this book is mostly philosophical about that threat. Its main point is that libraries are vital to a society’s ability to adapt to unexpected large-scale events, and that fostering community resilience should be a core mission. Resilience in the context of this book is a matter of social equity, intuition about the health of a library’s home community, and an understanding of what a library can do to knit its patrons together. Examples of libraries already doing this abound in the book’s second half. ALA Editions, 2018. 96 p. $24.99. PBK. 978-0-8389-1634-6. (Also available as an ebook.) 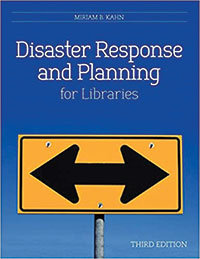 Disaster Response and Planning for Libraries, 3rd edition
By Miriam B. Kahn
Certain procedures are generally advisable for any type of library facing disasters. This book outlines them all in meticulous detail, covering everything from insurance preparation to mental health. Intensely practical, the book presents its information in checklist format, as procedurals, and as concentrated nuggets of advice. For this reason, as well as for its comprehensive view of library disaster management, this title would be most useful for upper management. In addition to the humane, the book devotes itself powerfully to the mundane; materials recovery comprises a large portion. Topics in emergency collection management run the gamut, from water damage on antique film to mold- and fire-damaged books. It’s hard to find a topic that this book doesn’t address. ALA Editions, 2012. 160 p. $67. PBK. 978-0-8389-1151-8. (Also available as an ebook.)