“Toronto Public Library (TPL), in partnership with Renewed Computer Technology and with support from the Toronto Public Library Foundation, recently launched its Internet Connectivity Kit program. The initiative provides vital connections for some of our city’s most vulnerable residents by equipping them with a free laptop and WiFi hotspot with four months of unlimited data. Participants will keep the laptop and Wi-Fi hotspot at the end of the program.

The library plays an important role in providing residents with equitable access to technology and internet connectivity across its network of 100 branches. But while branches are closed, residents without home internet access or limited data plans are unable to access online information or government programs, support their family’s education or employment needs, or connect socially with their families or friends. The Internet Connectivity Kit program supports vulnerable residents, including those who are newcomers or with low income identified by community partners as having a critical need for internet connectivity and access to a computer. 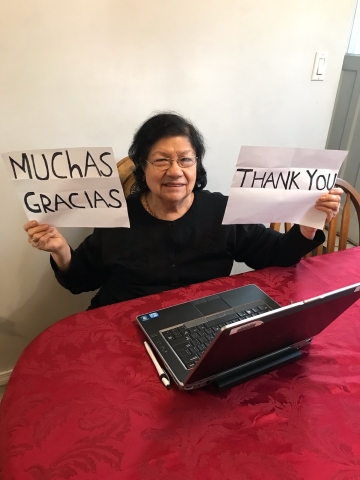 “We’re thrilled, but not surprised, by the incredibly thankful and positive response we’ve received from recipients and community partners to this program,” says City Librarian Vickery Bowles. “It really highlights a key gap and the growing digital divide in this city, especially among those most in need among us.”

The Internet Connectivity Kit program was developed in partnership with Renewed Computer Technology (RCT), and in consultation with the City’s COVID-19 Community Coordination Plan to ensure recipients are referred from community agencies responsible for identifying highest priority needs. The initiative is made possible in part thanks to the work of the Toronto Public Library Foundation and the generosity of an anonymous donor.

“Our goal as a Foundation is to support the Library and assist them in delivering impactful programs to Torontonians – particularly during this challenging time,” says Toronto Public Library Foundation (TPLF) president Jennifer Jones. “These kits are a perfect example of how together, with donor support, we can make an immediate and meaningful difference in people’s lives and ensure that those in our city who are most vulnerable are able to stay connected and engaged during this crisis.”

“Being a newcomer and facing language barriers puts our clients at a huge disadvantage, especially in a world where information is critical,” says Yasmin Yusuf, Mental Health Worker, Somali Immigrant Aid Organization (SIAO). “But thanks to Toronto Public Library, they were able to get the support that they needed to be part of a new world once again.”

To further support the City’s digital inclusion efforts, TPL is also continuing its Wi-Fi Hotspot Lending program – which provides 1,000 devices for six-month loans – during the pandemic closure period. TPL is working with City and community partners to identify recipients eligible for the program and to assist in their distribution while library branches are closed.

“Zoran” has been volunteering at West Neighbourhood House (http://www.westnh.org/) for several years and uses their drop-in computer lab to keep in touch with family back home. Since the pandemic hit, he has been completely isolated and unable to connect with his family. The isolation also reminds him of living through a war back home. He is thrilled that he will be able to re-connect with his friends and family and keep up with world news.

“Helen” had her purse stolen with her phone in it, which was her way of staying connected to her family and community during this time. Because her money was also stolen she would not be able to get another phone. She was very distressed and her face lit up when she was told that she would be getting a laptop and wifi. She will be able to stay connected to her people, reducing isolation and increasing her access to coping strategies and healthcare services online.”