The first IFLA Trend Report, released in August 2013, described the forces shaping libraries around the world, and asked the question: how will we access, use, and benefit from information in an increasingly hyper-connected world? The Trend Report is intended to be a starting point for ongoing reflection, analysis, and debate.

The report identified five top-level trends that will shape the information ecosystem: 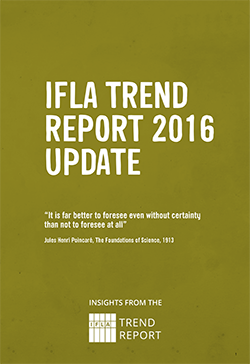 Between 2013 and 2016, the global IFLA community engaged in conversation and  debate about the Trend Report. The IFLA Trend Report 2016 Update shares the results of these conversations, and highlights new questions that were just emerging in 2013, such as Blockchain technologies, 3D printing, and the importance of redefining the role of libraries.

The IFLA Trend Report 2017 Update brings together the ideas that emerged during the annual President’s Meeting, building on the trends from the 2013 report. It also includes the perspective of the Global Vision discussions, which were initiated in April 2017, and have engaged thousands of librarians from across the globe to discuss how a united library field can tackle the changes in our world.

WHAT IS THE IFLA TREND REPORT?

In the global information environment, time moves quickly and there’s an abundance of commentators trying to keep up. With each new technological development, a new report emerges assessing its impact on different sectors of society. The IFLA Trend Report takes a broader approach and identifies five high level trends shaping the information society, spanning access to education, privacy, civic engagement and transformation. Its findings reflect a year’s consultation with a range of experts and stakeholders from different disciplines to map broader societal changes occurring, or likely to occur in the information environment.

The IFLA Trend Report is more than a single document – it is a selection of resources to help you understand where libraries fit into a changing society. Before you go any further, make sure you: