Premier Ford and the new Executive Council will be sworn in this Friday at 10am. For those interested to watch, the entire thing will be live streamed from the Premier’s official YouTube channel. After the new cabinet is revealed, FOPL will move ahead with sending congratulatory letters to the new (or returning) Ministers of Infrastructure, Heritage Sport Tourism and Culture Industries, and Education. We will work to engage the new Ministers and meet with them in the coming months. Advocacy at the local level should also continue. Send a letter of congratulations to your new or re-elected MPP, a template is attached. Now is the time to connect again to offer your best wishes as they begin their mandate, and to invite them to visit their local libraries to learn more about your important impact on the community and the critical role of the provincial government in supporting local libraries. If your library is in a riding with multiple library systems, connect with your neighbours to send a joint letter. You can refer to our priorities in our Pre-Budget Submission.

Last week, FOPL attended the AMCTO Conference in Niagara Falls. We had the opportunity to speak with 155 municipal representatives about the importance of keeping our public libraries independent and the value impact we have on our communities. FOPL contracted a tradeshow booth and received staffing support from Niagara Falls Public Library to help make this event a success. 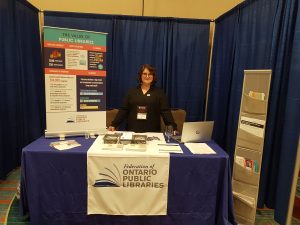