Update: Letters to the editor G&M

‘What next, grocery stores taking income away from chefs?’ Readers debate: Are libraries a net harm to literature and book publishing?

https://www.theglobeandmail.com/opinion/letters/article-what-next-grocery-stores-taking-income-away-from-chefs-readers/
This recent editorial opinion in the Globe & Mail has ignited another debate about the impact of public libraries sales.  It is ‘opinion’ since it remains remarkably research and fact-free.  However, it does deserve a research-based response.  Listed below are a few studies and articles that can help to respond to these sorts of editorials.
Overdue: Throwing the book at libraries by Ken Whyte in the Globe and Mail.
My notes: Small Canadian publishers (like the one he heads) couldn’t survive without the focus of Canadian libraries on buying Canadian authors and/or books. Again, we use jobbers and it looks like B2B retail in their stats but it isn’t. His theory that lending books is hurting sales is totally unsupported by research (and actually disproved by it many times).
Most Canadians don’t know that lending books in public libraries is supported by the public lending right (PLR). The federal government makes payments to those authors / creators whose books are borrowed. Often the publisher not the creator is the beneficiary under their contracts rather than the creator.
https://www.theglobeandmail.com/opinion/article-thanks-to-government-funding-libraries-are-poised-to-win-market-share/

Brewster Kahle: Libraries vs Bookstores? No, False dichotomy. They are different Animals

Public Libraries: How Authors Can Increase Both Discoverability and Earnings

The Case For Libraries

When it comes to books, libraries and publishers should be in it together, argues a leading marketing expert

Replacing The Myths About Marketing To Libraries
https://www.combinedbook.com/blog/replacing-the-myths-about-marketing-to-libraries
How libraries boost author book sales!
https://signup.gleekplay.com/en/html/sf/registration/eone_hydrate.html#&sf=eone&lng=en&ref=5172556&prod=1&spid=2sn5dmub4oh6b&sub_id=&_sign=a5643c82d5d9269e071268174d17a362&_signt=1595779096&utm_expid=
Pew FactTank Research
7 surprises about libraries in our surveys
“One of the big concerns in the publishing industry about selling e-books to libraries is that allowing free access to e-books through libraries might eat into book sales. In fact, Pew Research data show that those who use libraries are more likely than others to be book buyers and actually prefer to buy books, rather than borrow them. Among the 78% of Americans 16 years and older who had read a book in the previous year, according to a survey we did in 2011, a majority of print readers (54%) and readers of e-books (61%) said they prefer to purchase their own copies of these books rather than borrow them from somewhere else.” 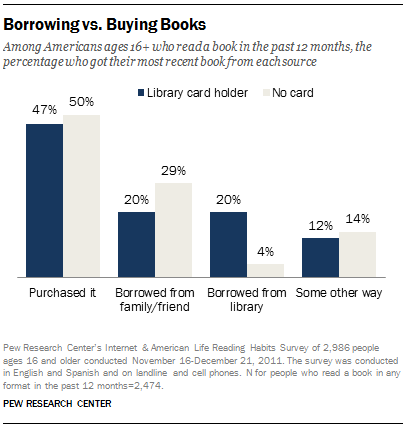